You Might Think You’re Effectively Delegating… But Are You?﻿ 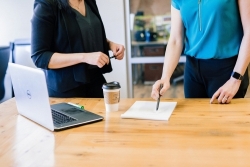 ​At MAP, we frequently tell our clients “delegate, delegate, delegate”! And for good reason. When leaders learn to delegate to their team members or direct reports, it frees them up to do more of what’s vital to their leadership role and responsibilities. Delegation also enables leaders to empower and develop their people’s skills, abilities and, ultimately, passion for their jobs. But it’s easier said than done.

Delegation can be challenging, particularly if you’re a leader who has always maintained a high or extreme level of control, which is normal and happens to be the case with a lot of developing leaders we coach. Given this, let’s explore a few ways to retain critical control while delegating effectively.

Carve an hour or so out of your day and think hard about what you can start offloading to others. Ideally, consider anything taking up a sizeable chunk of time because what you really need is time to focus and work on what’s vital.

For example, could someone else be leading a weekly two-hour meeting and simply brief you by email later? Should you be in on every marketing meeting/decision? Maybe you can step back from a project you initiated, promoting someone else to that lead role? True, letting go can feel uncomfortable, perhaps even scary. And from a practical standpoint, you may feel it’s not worth your time because you’ll have to train your people or watch them like a hawk at first. But when you make delegation a habit and see your organization, its people and even your leadership experiencing the rewards, you’ll get why letting go of those roles and responsibilities was so important in the first place.

Once you make a list of what to delegate, you might find yourself making excuses about why handing off those jobs or responsibilities might not work. Your job is to be a solutionist, however, so figure out what’s needed to make sure it happens.

Axe the excuses, addressing the roadblocks, maybe even asking those you’re going to lean on for suggestions and ideas. They may have great ideas about who can help, how they can help more, what resources they need to do it and do it well. Getting their input will help in creating consensus around the changes about to take place.

As leader, it’s likely you have the authority and/or ability to command instant changes. But if you’re going to shake up people’s roles and responsibilities, giving them more of what has previous belonged to you, don’t just roll out some unexpected orders. Make sure you explain the “why” behind the changes, remaining open to their feedback and suggestions.

This controlled, proactive and mindful strategy will help reduce common anxiety, build your people’s buy-in and, once they’ve taken on their new tasks, instill greater ownership in their new roles and responsibilities. Finally, remember to update job descriptions to ensure changes and expectations (including those tied to compensation or rewards) are documented, clear and understood.