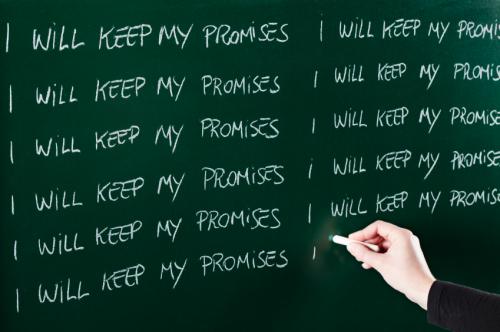 When it comes to leadership sins, there’s perhaps nothing more consistently offensive than failing to do what’s been promised. Why? Because when leaders fail to follow through on commitments big or small, it’s hard on others. People notice, remember and care when they’re let down. Consequently, they lose respect for their leader, and this impacts their motivation and productivity. If you’ve ever struggled with follow-through, remember that your direct reports are watching and evaluating your ability to honor commitments simply because you are a leader. You’ve just got to do what you say you’re going to do. For example, if you tell employees you’ll address their concerns about an issue, honor that commitment. You expect that of them, after all, so set the example, foolproofing your follow-through to support a culture of responsibility and respect.

Having a disciplined, conscientious approach to managing follow-through will make you better at keeping commitments. So here are a few related thoughts to keep in mind…

Define and communicate. When you say you’re going to do something, don’t just assume you’ll remember your promise or obligation. Write it down and then define and communicate — at least in writing if not also verbally — what that follow up looks like. You want to clue people in on what to expect and when to expect it, as well as who will likely be impacted or involved. Use iCalendar or another time management tool to set reminders, and you’ll be less likely to forget or overlook what you’ve promised. Also try to send out communications that keep people in the loop and demonstrate that you haven’t forgotten your commitment. For example, if your company has recently surveyed customers and promised survey results at the end of the month, sending out a mid-month email reminding them that survey results will soon be published tells customers that you’re on the ball and about to deliver according to plan.

Take commitments seriously. Every commitment you make is a moment of truth — an opportunity to create positive impressions about your leadership abilities and character. The more positive impressions you make, the greater your chances will be of winning the trust of those around you. But do you really need that trust? Yes! Because trust is the seed for growing relationships, and healthy relationships are at the heart of building successful, sustainable business ventures. If you break that fragile trust by not keeping a commitment, your company could tank in an instant and relationships could fall apart forever.

Don’t over-commit. A lot of leaders often say yes because they don’t know how to say no. Others over-commit because they’re afraid of how it might appear if they don’t. What they fail to understand, however, is that it’s far worse to over-promise and under-deliver than to not commit in the first place. What’s more, people actually have respect for leaders who know when to say no and can recognize their own limitations. So when you’re faced with the decision to make a commitment or promise, don’t take it lightly no matter how trivial the commitment seemingly appears. Make sure it’s something you can do, want to do and — most importantly — will use good follow through to do. Only then should you agree to commit.

What happens to profitability when the most trusted, reputable leaders break commitments?​